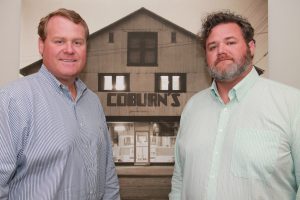 BEAUMONT, Texas — Coburn Supply Company is excited to announce the promotion of 4th generation family members, Patrick Maloney and Michael Maloney, to executive leadership positions. Don Maloney and A.J. Maloney will transition to chairman and vice chairman positions for the board.

Patrick Maloney, currently vice president and director of sales, will take the helm as president of Coburn’s. With more than 18 years of company experience under his belt, Patrick is known for his strong sense of sales leadership, is heavily involved in ASA and with The Commonwealth Buying Group and has made an appearance on the Supply House Times 40 Under 40 list.

Michael Maloney brings marketing agency experience and more than 17 years of Coburn’s marketing work to the table. Since the beginning of his career with Coburn’s, he has helped champion effective marketing strategies and oversees Coburn’s technology initiatives. Currently, Michael serves as vice president of marketing and current ASA Emerging Leader Chairman. In this transition, he will be taking the role of executive vice president of Coburn’s.

Meanwhile, Don Maloney will be transitioning from president of Coburn’s to chairman of the board, and A.J. Maloney will be transitioning from executive vice president to vice chairman. Don has served as past president of and both Don and A.J. were founding members of The Commonwealth Buying Group. Don celebrated his 50th anniversary with Coburn’s in 2019, and 2021 marks A.J.’s 45th year with the company. In 2019, they were both recipients of the first Coburn’s Spirit Awards — an honor given to those who exemplify the core values of Coburn’s.

Under Don and A.J.’s leadership, Coburn’s has increased revenue by 400% since 1998, growing its stores from 11 to 54. In that time, they also helped launch Coburn’s first website and establish Coburn’s Cares, a fund for employees in need after natural disasters.

“We’re all so proud to see these guys make their move into the executive seats for the company. They bring so much talent and experience to our team — you can definitely expect great things from Coburn’s moving forward,” says Don Maloney of the new appointments.

Since 1934, Coburn Supply Company has served both residential and commercial consumers by distributing plumbing, electrical, waterworks and HVAC products and services. With more than 50 locations and three centrally located distribution centers serving Texas, Louisiana, Mississippi, Alabama and Tennessee, the company also provides product availability for customers everywhere via its online presence at www.coburns.com.