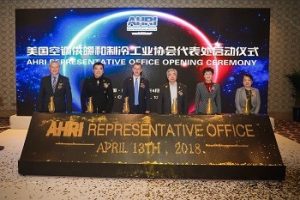 Arlington, Va. – The Air-Conditioning, Heating, and Refrigeration Institute (AHRI) opened its first office outside North America in Hefei, China, on April 13. The office will allow AHRI to engage directly with all members and certification program participants in Asia and the Middle East and position AHRI to provide timely service in those rapidly growing markets for AHRI standards and certification programs.

“Our globally recognized certification program is growing steadily worldwide, as is demand for AHRI standards.  This requires AHRI to have a stronger presence in Asia to promote our standards and manage manufacturer participants and oversee lab testing,” said AHRI President and CEO Stephen Yurek. “At the same time, we are a trade membership organization that attracts members from across the globe, and this office will allow us to better serve those members.”

More than 60 industry representatives, including member companies and certification program participants, attended the grand opening of the office.  Government officials from the Professional Supervisory Unit of Anhui Province (PSU-AHQI) and the NGO Office attended the opening, as did senior representatives from the China Refrigeration and Air-Conditioning Industry Association (CRAA), the General Machinery Product Inspection Institute (GMPI).  Representatives from several AHRI member companies were present, as were AHRI staff, including Yurek, Henry Hwong, and Bridge Xue, who will head the new office.

AHRI maintains a Headquarters Office in Arlington, VA, USA, and an office in Ontario, Canada.