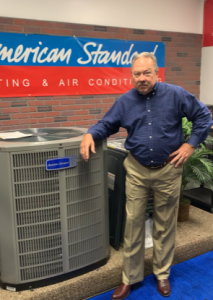 David Collins started in the HVAC business in 1966 when he was 13 years old.  He started by sweeping floors and loading trucks during the summers at his dad’s distribution company, Comfort Supply.

In 1977, Mr. Collins had the great fortune of meeting Mr. Bill Davenport, who would later become his boss and mentor for the next several decades.

In 1983, Mr.Collins was fortunate enough to join a small team of very special people, led by Mr. Davenport, to form ACES AC Supply. People were very skeptical at the idea that they could survive, given the state of the economy at that time.  Mr. Davenport’s incredible ability to connect with people, his honesty, his sense of right from wrong and always taking care of their customers created the culture that lives on today through his company and sons. The company is in the beginning of its third generation, an impressive achievement in today’s business world.

As much as Mr. Collins hates to leave such an incredible place and company, he feels it is the right time.  “There just comes a time and you know it when it gets there. I know, without a doubt, the company will continue to grow and thrive with our current leadership and our team members. ACES is an incredible place to work, and to do business.”

It has been a remarkable career for Mr. Collins. During his forty plus years he has made many life friends and watched as their dealers’ children have grown up and many have taken over their family’S businesses and continued to partner with ACES. The ACES team members and great customers are an important part of Mr. Collins’ life now and they will continue to be for the rest of his life.

David and his wife Michele will be retiring to Elgin, Texas, where they have a small ranch and close to their beautiful grandchildren.