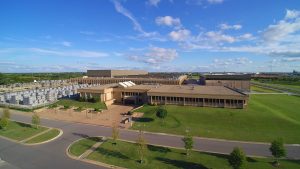 In 1971, the facility shipped its first HVAC system, which was a pivotal milestone for the plant and the beginning of its long history of HVAC manufacturing and innovation. It was originally owned by Westinghouse from 1971-1981 and subsequently purchased by YORK in 1981, which was acquired by Johnson Controls in 2005.

“Over the last 50 years, there has been continuous improvement at the Norman facility to modernize and expand the plant, automate the manufacturing process, improve safety and ensure our products are built to the highest quality standards possible for our customers,” said Vicki Davis, program management director, West region, Johnson Controls. “These improvements will make it possible for us to ensure all commercial rooftop units meet and exceed DOE 2023 energy efficiency requirements and will utilize the low-GWP refrigerant R-454B by 2025 to minimize our customers’ environmental impact and energy use.”
The most notable expansion the Norman facility underwent was in April 2019. The facility now features nearly 400,000-square-feet of incremental laboratory and manufacturing space, which includes a two-story, 52-foot-high testing lab roughly the size of one-and-a-half football fields. The extensive laboratory allows Johnson Controls to conduct on-site development, regulatory compliance, performance, safety, and reliability testing, including the ability to test a 150-ton rooftop unit in climates ranging from -30ºF to 130ºF. The 2019 expansion also included renovations to more than 150,000-square-feet of office and meeting space.

With a history of making buildings more sustainable for 135 years, Johnson Controls is a worldwide leader in the effort to decarbonize buildings. This includes developing solutions to facilitate the transition to electric-based heating and the development of OpenBlue, a suite of connected solutions that help drive building system efficiencies.