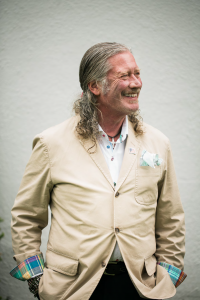 “We see Johnny’s role has been to secure Taco as a world-class manufacturer of advanced heating and cooling equipment with locations in the U.S., Canada, China, Italy, Switzerland, Korea, Hong Kong, and Vietnam,” explained Holohan. “For decades, under Johnny’s leadership, they’ve been unwilling to compromise product excellence, inventiveness and technological diversity.”

Taco Comfort Solutions is a family-run company that will soon celebrate the 100th year of its founding and a century of innovation. Johnny White is the third generation to provide exemplary leadership and vision for the company.
“I’ve seen it myself up close and personal,” added Holohan: “Johnny’s devoted to education for Taco employees, and the company invests heavily in training. Classes take place in Taco’s state-of-the-art, $20 million Innovation and Development Center [IDC] where they combine training with hands-on learning. Employees seeking degrees can also take advantage of full tuition reimbursement for Associate, Bachelor and Master’s level degree programs.”

In addition to many other volunteer commitments, Johnny is a member of the Society, a member of the Board of Trustees of the Brookings Institution in Washington, D.C. where he has endowed an annual program in “The Re-emergence of Manufacturing in the United States.”

The General Society of Mechanics & Tradesmen will recognize John Hazen White, Jr. for his many contributions to the industry on Thursday, Nov. 14 from 6 to 9 pm, beginning with a cocktail reception in The General Society Library, 20 W. 44th Street, New York, NY 10036.

The General Society of Mechanics & Tradesmen of the City of New York was founded in 1785 by the skilled craftsmen of the City of New York. Today, this 234-year old organization continues to serve and improve the quality of life of the people of the city through its educational, philanthropic and cultural programs including the tuition-free Mechanics Institute, The General Society Library, and its century-old Lecture Series.