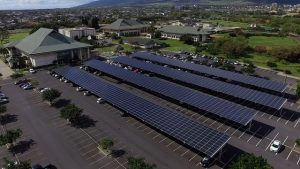 MILWAUKEE – The University of Hawai‘i (UH) announced that its Maui College campus will soon be among the first in the nation to generate 100 percent of its energy from on-site solar photovoltaic (PV) systems coupled with battery storage. The project is part of a partnership with Johnson Controls and Pacific Current that will also allow four UH community college campuses on O’ahu to significantly reduce their fossil fuel consumption.

In 2015, Hawai‘i became the first state in the country to make an unprecedented commitment to achieve 100 percent renewable energy by 2045. Concurrently, UH and the Hawai‘i Legislature established a collective goal for the university system to be “net-zero” by January 1, 2035, meaning the system would produce as much renewable energy as it consumes across its campuses.

Of the ten campuses, UH Maui College is on target to be the first to supply 100 percent of its energy needs through renewable energy.

“Hawai‘i’s leaders set the national example of sustainability and renewable energy standards with the net-zero mandate by 2035 for UH, and we’re proud to partner with the university to help it reach that commitment and aim for UH Maui College to become the first campus in the U.S. to generate and store 100 percent renewable energy onsite, 16 years ahead of schedule,” said Rod Rushing, president, Building Solutions North America, Johnson Controls.

Energy and infrastructure improvements at the five UH campuses involved in the project are scheduled to be completed by Q2 2019.

For additional information on the UH’s progress toward its net-zero goal, please see the Annual Report on Net-Zero Energy for the University of Hawai‘i 2018: https://www.hawaii.edu/govrel/docs/reports/2018/hrs304a-119_2018_net-zero_annual-report.pdf

About the University of Hawai‘i

Established in 1907 and fully accredited by the Western Association of Schools and Colleges, the University of Hawai‘i System includes 10 campuses and dozens of educational, training and research centers across the state. As the sole public system of higher education in Hawai‘i, UH offers an array of undergraduate, graduate and professional degrees and community programs. UH enrolls more than 49,000 students from Hawai‘i, the U.S. mainland and around the world. For more information visit www.hawaii.edu.

Johnson Controls is a global diversified technology and multi-industrial leader serving a wide range of customers in more than 150 countries. Our 120,000 employees create intelligent buildings, efficient energy solutions, integrated infrastructure and next generation transportation systems that work seamlessly together to deliver on the promise of smart cities and communities. Our commitment to sustainability dates back to our roots in 1885, with the invention of the first electric room thermostat. For additional information, please visit http://www.johnsoncontrols.com or follow us @johnsoncontrols on Twitter.

Johnson Controls Building Technologies & Solutions is making the world safer, smarter and more sustainable – one building at a time. Our technology portfolio integrates every aspect of a building – whether security systems, energy management, fire protection or HVACR – to ensure that we exceed customer expectations at all times. We operate in more than 150 countries through our unmatched network of branches and distribution channels, helping building owners, operators, engineers and contractors enhance the full lifecycle of any facility. Our arsenal of brands includes some of the most trusted names in the industry, such as Tyco®, YORK®, Metasys®, Ruskin®, Titus®, Frick®, PENN®, Sabroe®, Simplex® and Grinnell®. For more information, visit www.johnsoncontrols.com or follow @JCI_Buildings on Twitter.

Pacific Current is a newly established subsidiary of Hawaiian Electric Industries, Inc. (HEI) (NYSE: HE). Pacific Current is part of HEI’s strategy to develop and invest in opportunities that will help achieve Hawai‘i’s clean energy and sustainable future. For more information, visit www.hei.com.