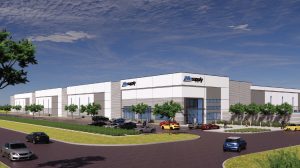 DAYTON, Ohio– Winsupply Inc., one of the nation’s largest

distributors of construction and industrial supplies and equipment, will

will own the 318,000 square foot center which is under construction

The distribution center is being constructed by Brinkmann Constructors and

Bobby Kellar, current operations manager of the Jacksonville DC, will

become the general manager of the Oklahoma City DC.

south-central part of the U.S. with one-day service,” Roush said. When

conditioning, electrical, waterworks and other supplies to contractors in

45 states. The company plans to begin operations from the Winsupply RDC in