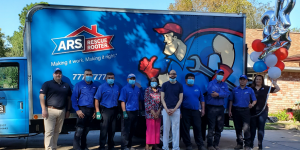 MEMPHIS, Tenn. – ARS, one of the nation’s largest providers of air conditioning, heating, and plumbing services, is honoring active and former Military across the country with its ARS Cares Saluting Our Veterans program. More than 25 veterans and their families will be the recipients of a new HVAC system or water heater in advance of the winter months.

“ARS Cares Saluting Our Veterans program is all about recognizing the selfless sacrifice on behalf of our veterans as they serve our country,” said Scott Boose, CEO, ARS/Rescue Rooter. “To read the nominations and see the outpouring of support communities have for these brave men and women was heartwarming. It is our honor to do this for them, and we hope this small token of recognition demonstrates our gratitude and appreciation for all they have done.”

Following the announcement of the ARS Cares Saluting Our Veterans program on September 29, family, friends, and co-workers were invited to share stories of why they felt the nominees were deserving of home improvements that would help provide a higher quality of life at home. Local ARS branches then selected recipients and installations began in November. In addition to the Saluting Our Veterans Program, ARS is also committed to the hiring of Veterans. Since 2017, ARS has hired at least 250 veterans annually and is looking to double that number in 2022.

Retired Korean War Army Corporal, William Sandles, is 90 years old and has survived two bouts of colon cancer. He is currently in rehabilitation, hoping to be released this month to be reunited with his wife of 64 years, whom he has not seen since August. ARS/Rescue Rooter Houston installed a brand-new HVAC system to ensure Mr. Sandles recovers in a well-cooled and ventilated home.

The ARS Cares initiative launched in 2016 to cultivate positive relationships with communities where we live, work, and play. Since that time, more than 150 home services makeovers have been completed, donating more than $1 million of HVAC systems and water heaters to deserving recipients. To learn more about ARS Cares and view official Terms & Conditions, visit ars.com/ars-cares.