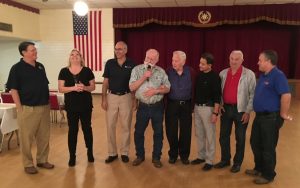 Charles E. Wright, 96, passed away peacefully in his sleep Friday, July 30, 2021 at his home in Houston. He was born July 22, 1925 in Washington, D. C. to Charles Erby Wright, Sr. and Elizabeth Redmond Wright. In early 1929 the family moved to Houston, TX where Charles attended public school graduating first in his class at Jeff Davis HS in January, 1942.  Shortly after graduation he returned with his parents and 3 year old sister, Jean, to Washington, D. C. where he became a machinist apprentice at the Naval Research Lab.  In early 1943 he was granted a furlough from the Navy Yard in order to join the Army Air Force, and in November, 1943 he met and married Catherine J. Foley.  After aerial gunnery training in Missouri and Las Vegas and earning the rank of Sergeant at age 18, he served in England with the Eighth Air Force’s 91st Bomb Group as a gunner and toggalier on a B-17 “Flying Fortress “.

After WW II Charles returned to Washington, worked at the Naval Research Lab, attended George Washington University on the GI Bill, drove a Checker cab, and in 1946 welcomed his first daughter, Michele. Transferring to the University of Houston in July, 1947 to pursue a degree in Architecture began Charlie Wright’s love of all things Cougar. While attending U of H full time, he held down a full time job as The Houston Post Newspaper’s largest distribution agent covering southern Harris County, Brazoria County, and Fort Bend County, served in the Air Force Reserves, and in 1949 he and Cathy welcomed their second daughter, Kathaleen. By 1950 he had moved his growing family from their small on-campus apartment and bought their first home in southeast Houston.  With the arrival of Charlie and Cathy’s third daughter, Joy, in 1955 larger quarters were needed so in 1959 the family moved into the house in southwest Houston Charlie has called home for 62 years.

Graduating from U of H with a BS in Architecture in June 1951 and facing years of low paying apprenticeships, Charlie made a life altering decision.  When Hackley Morrison, Sr., a customer on his Post Newspaper route,  offered him a job selling attic fans en mass to homebuilders, Charlie saw an opportunity he couldn’t pass up thus beginning his long and successful history with Texfan and a dream to bring conditioned air to the state of Texas. Charlie wanted to see Texfan move into  the burgeoning HVAC industry,  but the owners weren’t enthusiastic. So in 1952 Charlie and his best friend W. R. Trahan founded the Wright Company for the sales and installation of residential  heating and air conditioning systems. They successfully manufactured and sold products vital to the growing HVAC industry including the insulated register box for which Charlie held the original patent.

Charlie Wright returned to Texfan in Dec, 1953 to create and head up their Heating and Air Conditioning Division . As a pioneer of the HVAC industry he initiated training programs to guarantee a knowledgeable labor force for the industry, established standards for ethical business practices, incentivized employees to excel, and fostered initiative and entrepreneurship. By 1955 he was Vice President and General Manager,  President from 1970-1978 and owner from 1978 until he sold Texfan to Atlantic Richfield and retired for the first time in 1983. Charlie went on to establish, co-found and operate many businesses like Comfort Supply in 1964, CEW, Inc, an Investment and asset management company, and Gulfstream Corp. He served on numerous professional boards and councils on the city,  county, and state levels, and in personal, educational and religious endeavors.

As professionally and civically accomplished as Charlie Wright was, his greatest happiness was the love of his family, extended family, and friends. He was loyal, supportive, appreciative and respectful of his friends, and it was reciprocated in kind. He was faithfully protective of his “baby” sister, Jean, and her family and his nieces and nephews. He cherished his wife of 65 years, Catherine Jane, and was devoted to his three daughters,  2 grandsons, 6 granddaughters, 5 great grandsons, and 4 great granddaughters.  He had a long, eventful and fulfilling life, and he will be profoundly missed and loved — Always.