One in Eight U.S. Homes uses a Programmed Thermostat with a Central Air Conditioning Unit 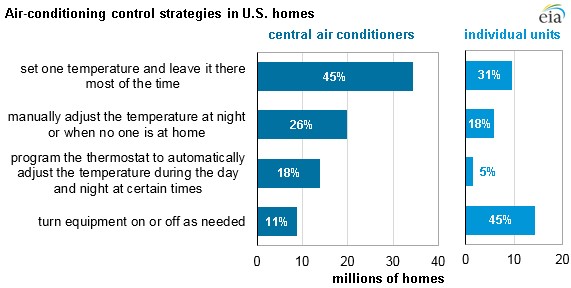 In EIA’s 2015 RECS, respondents were asked how they set indoor temperatures during the summer. Almost half (45%) of households using central air-conditioning units said they set the thermostat at one temperature and left it there most of the time. The second most common approach was to manually adjust the temperature at night or when no one was at home (26%). Using a programmable thermostat to automatically adjust indoor temperatures was the third most common approach (18%), and it was more common than manually turning equipment on or off as needed (11%).

Smart thermostats, also known as learning thermostats, observe household behavior and create a temperature-setting profile without the need for user intervention. About 3% of RECS respondents reported having a smart thermostat.